In the Christmas holiday season, we remember those near and dear to us, no matter where we are. 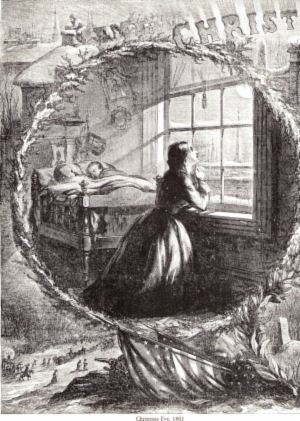 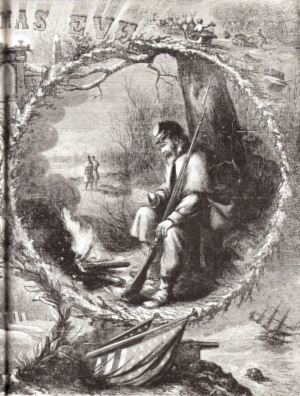 No one is too far away or too old to not enjoy a visit from Santa Claus! 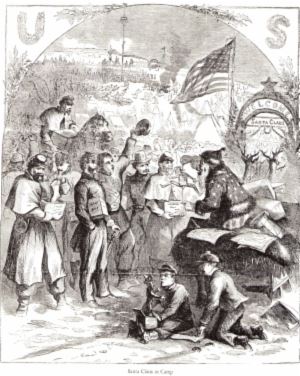 From The Last Christmas Before the War, December 25, 1860

...South Carolina had seceded on December 20th and the other Southern states were threatening to follow her out of the Union...The possibility of war was already hurting retail trade on this last peacetime Christmas. The New York "Herald" reported that "People have not got so much money to spend on Christmas presents as in former years, or if they have, they think it more prudent to husband it for expenditures of more real importance." Jewelry sales were down; so were the sales of furs, buffalo robes, and blankets. But toy sales, fortunately, were still good. So were the sales of confectionery.

And the "Herald" commented in an editorial on Christmas Day: "On this Christmas morning we find these states surrounded with perils as terrible as they are unprecedented. The good Ship of State is rushing madly toward the breakers of disunion; the pilot is no longer able to steer his course; already one plank has started; but thank God, the others still hold. Our best bower anchor, the Constitution, has been let go, and we may yet weather the storm. If not, it will one many a long day before the people of the United States see another merry Christmas."

But after a few comments the editorial continues: "So the young people shall have their Merry Christmas, and Santa Claus shall be as liberal as ever; the hymn of praise and thanksgiving shall ascend to the Giver of all good; the Christmas tree, the evergreen wreath, the Yule log, the mistletoe bough, all the time-honored symbols of jollity and good cheer, shall be duly honored throughout the length and breath of this fair land. A right Merry Christmas, then, to all!

By the time the Civil War came, Santa was a rather well-established figure, who was as popular in the South as in the North. But the North had one great advantage over the South. It had many illustrated periodicals, while the South had very few. This lack of illustrated papers meant

that few pictures were made of social activities in the Confederacy during the war. The Union side is much more fully presented. The few Confederate artists who recorded the war concentrated largely on its military aspects. Fortunately, there were many Southerners...who wrote excellent accounts of what went on in those eventful years.

The North was...rich..in manpower and weapons..in food and all the good things that do so much to make Christmas a time of feasting and celebration. Although there were many desperately poor people in the North there was never a shortage of food. But as the war dragged on, food grew scarcer in the South, and Christmas became progressively leaner each year. People there had to improvise and make do; they thought up all kinds of ingenious substitutes for fancy goods, party decorations, and tree ornaments. But the spirit of Christmas was kept alive, even when parents had to skimp and do without in order that their children might have a happy holiday on the one day of the year that is particularly the children's own.

The picture of Christmas that emerges from contemporary Civil War accounts is a sturdy Victorian one with simple domestic virtues strongly emphasized and traditional customs upheld.

In the field, very little actual fighting was done on Christmas Day. This was not because of religious or sentimental reasons. Major Civil War campaigns usually began in the spring and went on until cold weather closed in, when bad roads and severe weather forced the armies to suspend activities for the winter.

When cold weather set in, the men in both armies began to build huts and cabins to which they added chimneys so a fire could be kept going to warm the interior. The cheerful flames and the cozy glow of the firelight gave these rudely built temporary shelters the illusion of being homes. Undoubtedly they reminded the soldier of their own true homes and the families they had left behind.

The young men in our Civil War armies were far less sophisticated than their descendants are today. Many of them came from the country; many from large families where domestic relationships were close; nearly all were used to living in big houses where there was plenty of room for parties, for happy celebrations- and for full-sized Christmas trees. To them, Christmas meant a great deal, so they naturally looked back to it wistfully during the war...And on Christmas night, after the feasts and celebrations were over, the lonely men would express their longing for home by singing the carols they had learned in their childhood. Then the voices of the men in blue and in gray would sound loud and clear in the cold night air, rising above hill and valley, and drifting out over shell-torn fields where the armies had already fought.