Many collections that museums have today were items taken off of battlefields or places where soldiers camped. Soldiers themselves took souvenirs and brought them back or sent them to their families back home. Today it is illegal to take relics from protected battlefields, such as those occupied by the National Park Service.

Typical items found on the ground are cartridges and bullets, both unfired, fired, and damaged from contact with hard objects.

Closer view of lead bullets and unused paper cartridge, which held the bullet and the gunpowder. The ringed bullet (one kind was the Minie bullet) and its conical shape were innovations that moved firearm technology forward- more accurate and more deadly.

Typical brass buttons were domed and constructed of two pieces. They had a shank, or metal loop on the back for sewing onto the coat. The Federal spread eagle was very common. Large buttons would be used on coats, the smaller used at the cuffs. 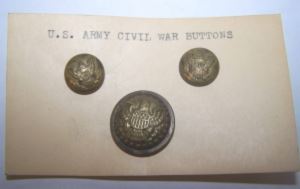 Typical brass buttons were domed and constructed of two pieces. They had a shank, or metal loop on the back for sewing onto the coat. The Federal spread eagle was very common. Large buttons would be used on coats, the smaller used at the cuffs. 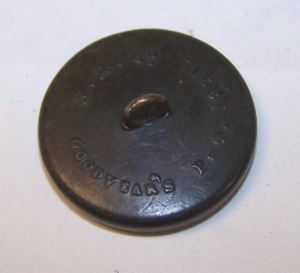 In the 1850s Goodyear patented and started to produce hard rubber buttons. This is one kind and was often on civilian garments during the Civil War era.

This is a state of Michigan brass 2 piece button. Domed and rimmed, it depicts the state seal, with a shield flanked by an elk and moose (though they look like deer here), surmounted by the Federal eagle. In the shield is a pioneer looking over the peninsula. A flag flies here, and though it is not on the button, "Tuebor" means "to defend."

Buttons are one of the most common remnants or souvenirs left from the Civil War. Uniform coats would have either the Federal or state buttons upon them. They could be marked with an additional "A" for Artillery, "I" for Infantry, or "C" for Cavalry, depending on which branch of the service the soldier was in.

When some veterans came back from the war and got rid of their coats (due to their poor condition or infestations), the buttons would be saved and placed in a box, or strung on a sturdy string. 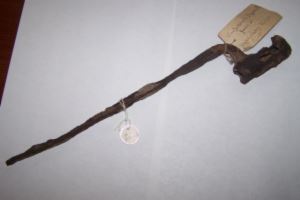 Other relics include items used by the opposing army. A Confederate bayonet was taken from a Southern battlefield. Rust has got the better of this iron object over time. A bayonet was a knife-like attachment locked into place at the barrel end of the gun, used for charges and intimidation. Soldiers also used these for a variety of other purposes- the socket end could hold a candle while the spear end was stuck in the ground.

Food could be roasted on the spear end over a fire. Bayonet thrusting was something a soldier learning in the drill, though it was not used as often as sometimes portrayed in movies and stories.

Metal relics also include ammunition such as cannon balls, dropped personal items such as knives and jaw harps, belt buckles, stirrups, insignias, guns, and more. Cloth and leather often deteriorated faster than metal, but items such as haversacks, blankets, coats, belts, straps, and boots could also be found.